Look not to yesterday

or for guidance to tomorrow

Look only into yourself

and decide what it is you want

and then act so that you achieve

A day in the life

It’s rather hot right now. I hope it rains. The winds are switching over the Indian Ocean, so the monsoon rains will be coming. I don’t really want that much rain – I do like the sun. It’s hard to remember that much of the time it’s cloudy here. Right now it’s sun, heat, and sweat. Life in the tropics without air-conditioning, or even a hint of breeze, is growing old.

I wrote 1,640 words yesterday. It was a bit slow going, but each time I was ready to stop, after reaching my daily quota of 500 words, there was just a little more I needed to write before I forgot what I was thinking. I must be somewhere near the end of the chapter. Their will be one more and then ‘The World Revealed’ will be finished.

I am not looking forward to starting at the beginning and discovering how many typo’s there are. I know I’ll find a couple per page, and miss a couple more. Dyslexia – I know what I think is on the page – and it’s often not actually what is there.

I went for a walk and took some pictures to add to my website and blog. You gotta have content they always say. My camera has spots all through it’s guts – too much fungus growing in the hot heat.

After attempting to repair my pics in Photoshop I watched Doctor Who S06E01 and The Game of Thrones S01E02. Interesting opposites in the world of SF+F.

SV Sara B in Langkawi, Malaysia 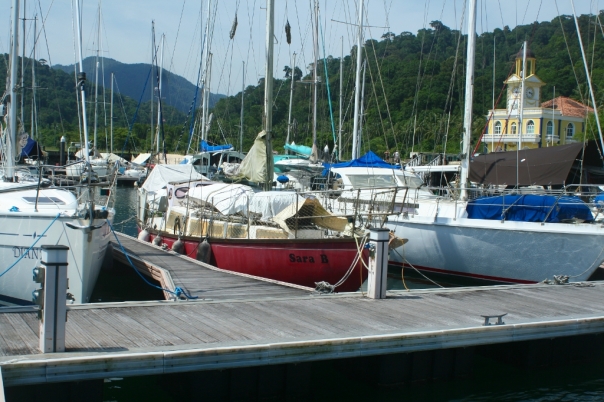 'Sara B' is a Lello 34 that I bought in Cape Town, South Africa in 1984. Sailing seemed like an interesting way to return to the United States after I finished my Masters degree at the University of Cape Town.

After sailing from Cape Town to Florida, through the Panama Canal, across the Pacific Ocean to New Zealand and Australia I completed a PhD at the Australian National University in Canberra. I then sailed across the Indian Ocean, up the Red Sea to Turkey, Greece, and Venice. In Venice I decided to turn around and head east rather than west, and sailed back down the Red Sea, spending a year in India, before arriving in South East Asia. 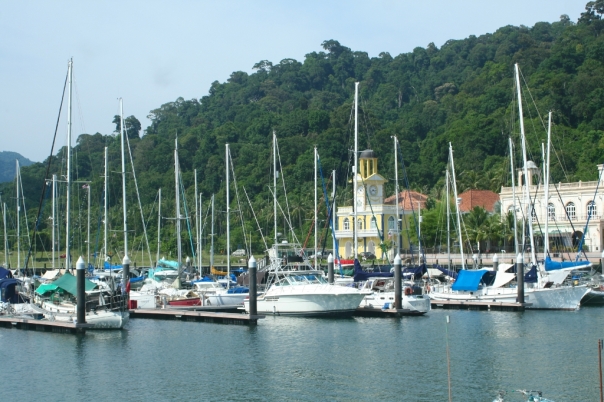 I am now in the Telaga Harbor Marina on the island of Langkawi in Malaysia.

The Magic of Pixies -from ‘The World Revealed’

Hamish carried Lyze over to the door into Riversea. He reached out his hand … and pulled the handle off of the door. “Now there will be more space for bookshelves.”

Lyze took the heavy metal fitting from him, and looked at it. “Shouldn’t you have to say something, when you do Magic? How does Magic know you are asking something of it? What if you had wanted to open the door, and not seal it … it’s completely gone now.”

Hamish didn’t bother turning to look. “Magic does what it wants to do. You do not tell your heart to beat, or your tongue to wiggle when you want to speak, do you? Your heart just keeps beating as you ignore it, and you tongue acts, while you concentrate on your words, and not the mechanics of creating them.”

Hamish felt a moment of shock, and then understood. It hadn’t been all that long ago … when he’d had to ask Guide Navarra what Magic was. Now …

“Now you are Magic, aren’t you?” Lyze said. “You accused me of not being your true daughter, and perhaps it is true, for you are not exactly a man, are you?”

An indelicate way of stating his obvious problem with women …

“You are a pixie, aren’t you?” Lyze stated. She remembered something he knew he’d said – about Pixx. Pixies are enchanting creatures made of Life and Magic, and little else. They are Souls that can live in, and animate, whichever of the Elements that they choose. They are notoriously feisty and independent, and when seriously provoked, can turn into something much less beautiful – and much more dangerous. Their alternate form is all claws and spines and teeth … but they are very loyal and protective of the ones they love.

Hamish couldn’t do anything but hug Lyze back. He was equally relieved, for exactly the same reason. He wasn’t a demigod. He hoped he wasn’t a demon. A pixie was just about right.

The trimarans designed by Dick Newick are some of the most beautiful boats ever. NAGA is a flawless example built in wood-epoxy in 1980 and is still going strong. She won her class in the 1982 Route du Rhum and the 1984 OSTAR.

She is still owned by Jack Petith and is cruising with Chrissi Serini. They left Langkawi and are heading towards Singapore.

The sad part of cruising around the world is always saying goodbye.

Thoughts on finishing ‘The World Revealed’

I’ve been writing ‘The Binding Returned’ and ‘The World Revealed’ with each chapter in a separate file. It makes each milestone a little more tangible. Finish a chapter, close the file. Back it up in as many places as possible in case the ‘Sara B’ sinks thanks to the next storm, tsunami, or act of personal stupidity.

I wrote ‘The Binding Returned with no margins on the page, and a small font, so I could see a lot of words at the same time. When I put proper margins on the page, and a normal font, I found the chapters were rather long. So for ‘The World Revealed’ I tried to stick with more normal layout parameters, which has meant the chapters are shorter, and I hope the pace feels a little faster.

Although I keep track of my daily writing in the necessary spreadsheet, and have daily and weekly goals to meet, I have never quite noticed the total. ‘The Binding Returned’ is about 195,000 words, which I managed to squeeze in 550 pages when I formatted the book for Createspace. A couple of weeks ago ‘The World Reveled’ had about 60 chapters, and 175,000 words, and according to my outline had another 20 chapters to go. It was getting too long.

The next chapters were also drifting into events that should be in the third book ‘The End Of The Nightlord’ since they begin the direct conflict between Hamish (the main character) and the Nightlords. Having realized I was at the end of book 2, I’ve now had to end the book – wrap up the plot threads and set up the next installment. I’ve had to do a little thinking to sort out exactly where I want to leave the reader. Middle books in a trilogy suffer from being middle books. They carry on from the first novel, but then are meant to leave the reader desperate for the third and final book.

I hope ‘The Binding Returned’ is strong enough to get readers interested I the series, and then that ‘The World Revealed’ leaves them thirsting for ‘The End of The Nightlord’.

The next 4 books – ‘The Mastery Of Magic’, ‘The Ending War’, ‘The Period Of Prophecy’, and ‘The Time Of Testing’ will be stand-alone novels covering subsequent generations over the next couple hundred years following the events of the first 3 books.

The first draft of ‘The World Revealed’, which is the second volume of DOOR, the first of the five Books of Time, is one chapter away from being finished. I hope it happens in the next few days.

I’ll then circulate it on the Critters Writers Workshop which I have really enjoyed participating in. I hope people won’t tell me I’m still making the errors of ‘The Binding Returned’ – which were too much dialog, and not enough noticing of the environment around the characters. This was done on purpose, but makes ‘The Binding Returned’ a difficult opening novel for the whole series.

Before getting stuck into the revision of ‘The World Revealed’, I’ll start on ‘The End of The Nightlord’ since the next events are fresh in my mind.

When you live in a country you are not a citizen of, you are always aware of the passing of time – and when your visa expires, and when you have to get out. So far, living in Malaysia has been hassle-free. Every 3 months I have to visit Thailand for 3 days, and then I can come back and get another 90 days of life.

Since Langkawi is right on the Malaysia – Thailand border, visiting the nearest big city, which is Hatyai, is a nice shopping experience. It only requires a ferry ride of about an hour and then a bus trip of another hour or so.

But every time I leave the boat, I always wonder if I will be allowed to return – or will I end up some homeless, stateless person?